Those who died in World War Two

Eleven ex-pupils from Hemel Hempstead Grammar School were killed during the Second World War.  They are listed here.

Others who lived in Hemel Hempstead are listed in the 'Roll of Honour' below.  They include Battle of Britain pilot Denys Mileham.

Germans who were originally buried in Heath Lane Cemetery and later moved are listed below.

This list began with 136 individuals who served in the military and whose next-of-kin details in the Commonwealth War Graves Commission database contain references to at least one of: ‘Hemel Hempstead’, ‘Boxmoor’ or ‘Apsley End’.  As our research progresses, we have added further names and the list is now a cumulative one of all the memorials we have photographed.  Note that there is almost certain to be some duplication of names below, but until it can be confirmed that possible duplicates are not different people, that is inevitable.

Further information on some of the men listed whose names appear on the Hemel Hempstead War Memorial near to St John's Church in Boxmoor can be found at Roll-of-Honour.com and on a site run by Stephen Stratford.

If you have any details on any of the men listed, including photographs, please get in touch through the contact page at: Contact Us

Further details, including information such as next-of-kin, home address and place of burial can be obtained on the CWGC website at CWGC Search by entering the surname, first initial and year of death in the appropriate spaces.  The CWGC website also allows members of the public to create and print a Memorial Certificate for each person recorded in the database.

Nine of the individuals are recorded as civilian deaths in Belswains Lane on 10 May 1941.  It is possible that they were all killed in the incident which saw houses destroyed close to Nash Mills Primary School.  They are: Doris Beevor, William Chennells, Harold Robert Dyer, Albert Fenton, Maria Fenton, Florence Franklin, William Franklin, James Munday and Lilian Sheldrake.  We are grateful to Clive Lewis for providing this information.

i Individual memorial or grave in the area, or other information (details on page for individual)

The Roll was prepared by Prof Richard Grayson of Goldsmiths, University of London.

Those involved in the Hemel at War project had heard rumours for some time about Germans buried in the Heath Lane Cemetery but had not been able to find anything out. However, Gregg and Theresa Bisgrove were also on the trail and have passed on information they received from the Commonwealth War Graves Commission in November 2011 as follows:

Having checked our archival documents for Hemel Hempstead (Heath Lane) Cemetery, I can confirm that four Germans were originally buried in the cemetery, three soldiers and one airman. They were exhumed and reinterred in Cannock Chase German Cemetery in the 1960s.

Following this agreement, the German War Graves Commission (Volksbund Deutsche Kriegsgraberfursorge) made arrangements to transfer the graves of German servicemen and civilian internees of both wars from scattered burial grounds to the new cemetery established at Cannock Chase. The inauguration and dedication of this cemetery, which contains almost 5,000 German and Austrian graves, took place in June 1967.

I list below details of the four Germans who were originally buried in Hemel Hempstead (Heath Lane) Cemetery, along with the details of the location of their present graves: 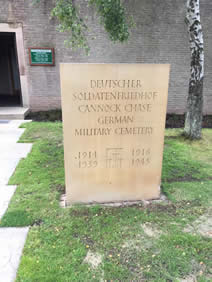 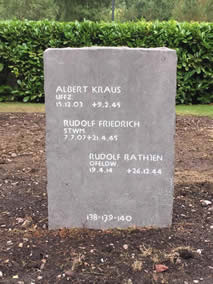 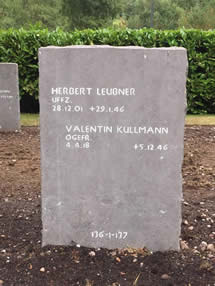