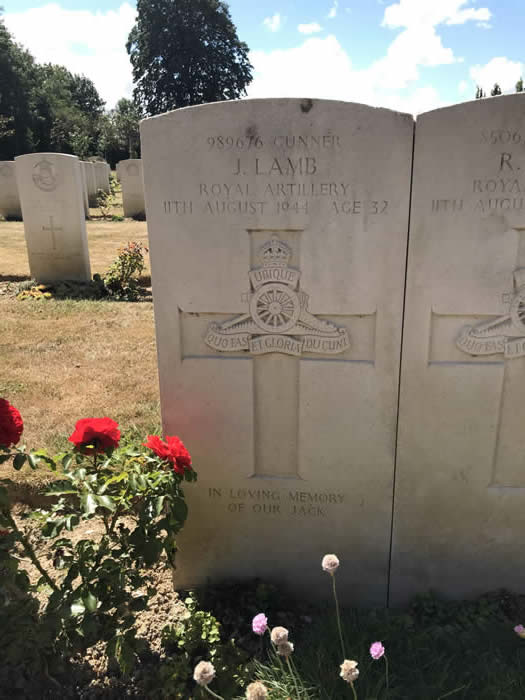 The information below was provided by John's son, Bernard Lamb, whose grandfather, George Lamb (John's father), was killed in the First World War. 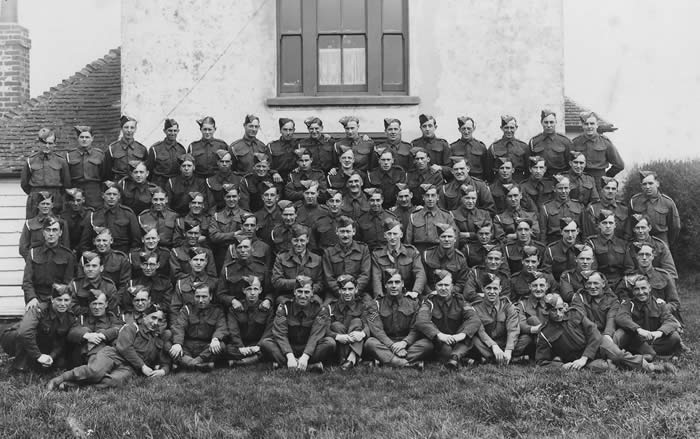 Royal Artillery 14 Coastal Group around 1943 somewhere in Sussex. John is 3rd from right, 3rd row down.

In 1939 when war broke out John was working as a Book Binder for John Dickinson and Co at Apsley Mills. Along with many of his colleagues he joined the army, enlisting in The Royal Artillery on 18th July 1940.

At first he was with the 22nd Medium & Heavy Training Regiment R. A.  His first active posting was to 375 Coast Battery at Shoeburyness on 13th August. His next move was to 14 Coast Artillery Group on 1st January 1941 remaining with this unit until 20th December 1943 when he was posted to the 21st Anti Tank Regiment R. A. These last two units were part of the Guards Armoured Division which was formed on 17th June 1941.

During his time with 14 Coast Artillery group he met Hilda Margaret Chamberlain. She was living in Burlington Place, Eastbourne having been transferred there in November 1939 in connection with her employment as a National Insurance Clerk. They were married on 30th May 1942 at Spruce Hill Baptist Church, Walthamstow. 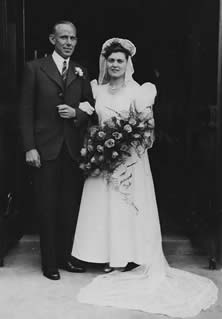 John and Hilda on their wedding day

On 5th and 6th June 1944 radio silence was ordered so as not to interfere with the D Day operations. On 17th June the order came to proceed to the marshaling area Camp J to wait for a ship to take them to France. They transferred to Tilbury on 22nd June to board HMS LST 199 sailing at 08.00 for Juno Beach. They arrived off the beach at 14.30 on the23rd and anchored in 5’ 9” of water. Unloading was completed by 17.45.

The first action against German tanks was near Cheux. The River Orne and the Caen canal were crossed at Benouville. On 15th July two football matches were played, Q Battery beating Y Battery 5-2 and the Officers of Q and Y Batteries easily beating the Sergeants. After a torrential thunderstorm on 20th  everything was flooded. By 1st August the regiment was South West of Bayeaux and then advanced slowly towards Vassy. By the 9th they were encamped south of the cross roads at St Charles de Percy.

John was killed in action on 11th August 1944 and was buried in the cemetery at Banneville-la-Compagne near Caen. After the regiment had advanced through Holland and into Germany a memorial service was held at Pinnerburg on 15th July 1945. The losses sustained by the regiment were fifty one men dead and two missing.

John is listed on the John Dickinson memorial in Apsley.