In April 2021, the 'Hemel at War' project was contacted by Dr Bruce A Tocher, a researcher in Norway.  He is seeking to contact relatives of the 48 men who took part in the abortive 'Operation Freshman', the first attempt to destroy the Norsk Hydro plant, which was manufacturing 'heavy water' for the Nazi nuclear weapons programme.  Dr Tocher has so far made contact with 32.  This is as part of preparations for commemoration of the 80th anniversary in Norway.  Among the 16 men with no relatives yet contacted is Sapper Frank Bonner who was captured by the Gestapo and shot by firing squad.

The full extent of Bonner's Hemel Hempstead connections is unclear.  He was born in Sunderland, but is commemorated on the town's main war memorial, and in July 1936, he married Phoebe Granville from Hemel Hempstead.  His army next-of-kin details record her as living at 75 Queen Street (now the Old Town end of Queensway) in the town.  A 2011 Special Forces Roll of Honour posting shows him as having two daughters, Maureen (Mawson) and Joan, but it has not been possible to locate either.

The Operation Freshman Project is trying to trace any surviving relatives or people who have stories or anecdotes concerning the servicemen who participated in the raid, and who may have photographs, letters or other documentary information relating to the servicemen. The idea is to tell the story of these incredibly courageous young men through their lives, and lives of their families, rather than more conventional histories which focus primarily on the events themselves.  Please contact us if you can provide any information on Frank Bonner.

*Note that while the Commonwealth War Graves Commission record Bonner as being killed on 18th January 1943, the Prison Record from Grini Prison shows the men being signed out at 4:20 a.m. on the 19th January 1943. From there they were driven to Trandum Wood and shot.

by Bruce A Tocher

In July 1942, the British War Cabinet decided to try to destroy the heavy water production facilities at the Norsk Hydro facility near Vemork, Norway. The reason was the concern that the heavy water was being used as part of Nazi Germany´s programme to develop a nuclear bomb.  After much discussion, it was decided to use specially trained Royal Engineers to carry out the task. They were to be flown to a landing site on the Hardanger Plateau, near the Vemork facility, using two Horsa gliders, each towed by a Halifax bomber.

On the evening of November 19th, 1942, despite some misgivings regarding the weather over the objective, two Halifax bombers, each towing a Horsa Glider took off from RAF  Skitten, near Wick in NE Scotland. On board each glider were 15 specially trained Royal Engineers, and two pilots. Their top-secret mission was code-named Operation Freshman.

Waiting near the target zone were a group of four Norwegian special forces (Grouse Team) who had parachuted into the area some weeks earlier. Their primary mission was to light flares on the planned landing zone on the Hardanger Plateau, then guide the engineers to the target – the Norsk Hydro heavy water facility.

Tragically, due to failures in the navigation and guidance systems, and poor weather, the aircraft failed to identify the landing zones and were forced to turn back. On the return journey, ice began to build up on the tow cables and the increased weight began to seriously affect the flight performance, as the planes lost altitude. At a point over southwest Norway, the cable between Halifax A and its glider snapped and the glider was released, and it crash-landed in a steep mountain valley, Fyljesdalen. Halifax A made it back safely to Scotland, extremely low on fuel.

Of the 17 men onboard Glider A, eight were killed on impact, including both glider pilots. The dead were initially buried near the site of the crash in a steep valley, Fyljesdalen, near Lysebotn, Norway. 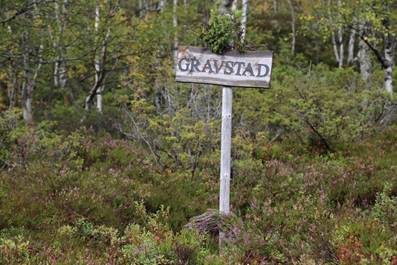 Original burial site of the 8 men killed when Glider A crashed in Fyljesdalen, Lysebotn, Norway. Photograph by Dr. Bruce A. Tocher.  At the end of the war, their bodies were recovered and reinterred in the Commonwealth Grave at Eiganes Cemetery, Stavanger.

Four,  badly-injured soldiers from Glider A, were brutally murdered by the Gestapo in Stavanger sometime on the 23/24th November, 1942. Their bodies were then weighted down with rocks and dumped at sea off the coast of Stavanger, Norway. In 1985, a special memorial was raised to these four men with no known grave in Stavanger. 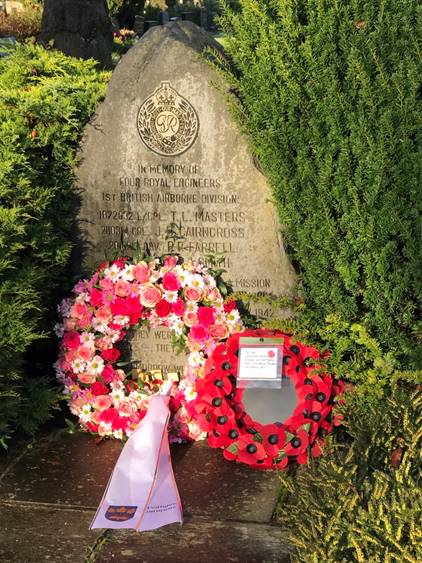 Memorial to the four Freshman soldiers with no known grave, Eiganes Cemetery, Stavanger, Norway. Photograph by Dr. Bruce A. Tocher.

The five remaining survivors from Glider A, including Sapper Frank Bonner, were held in the Gestapo Prison in Lagårdsveien in Stavanger for a number of days before being transported to the concentration camp at Grini, near Oslo. The Grini records indicate that they entered the camp on the 29th November. According to statements made at the War Crimes Trials, the men were interrogated at both Grini and the Gestapo Headquarters in Oslo during the period of time they were held in captivity. On the 19th January, 1943, they were taken out of Grini and transported to Trandum Wood, north of Oslo where were executed by firing squad. 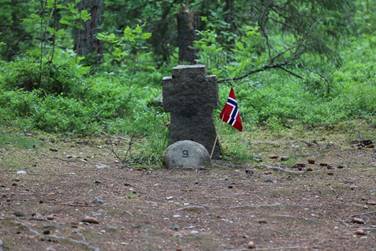 Grave 9, Trandum Wood, near Oslo, where Sapper Bonner was originally buried before reburial in the Commonwealth Grave in Oslo West Cemetery. Photograph by Dr. Bruce A. Tocher.

The bodies were initially buried in an unmarked grave but were recovered by the Norwegian authorities in 1945 and reburied in the Commonwealth Grave at Oslo West Cemetery.

The fate of Combination B was almost certainly similar to Combination A, in that at some point the tow plane and its glider became separated. However, in this case, both glider and tow plane crashed near Helleland in southwest Norway. The seven-man crew of the Halifax were killed instantly on impact. They were initially buried in a shallow grave close to the crash site but were subsequently reinterred in the Commonwealth graves plot in Helleland Churchyard, Rogaland, Norway at the end of the war with full military honours. 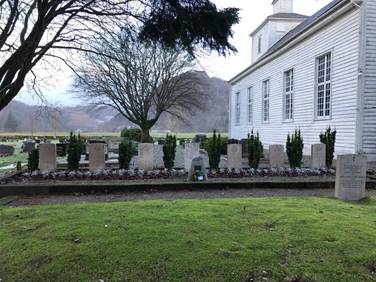 Three men were killed when Glider B crashed on Benkja Mountain; including both Australian glider pilots. Fourteen survivors surrendered to the German Army. Later that same day, the 20th November 1942, they were led one by one to an area within the German Army camp at Slettebø (near Egersund) and executed by firing squad. 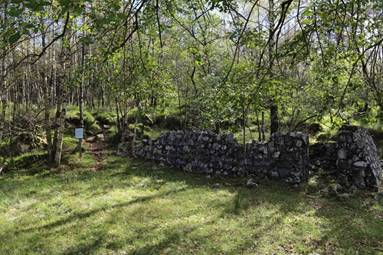 Execution site of 14 British soldiers from Operation Freshman at Slettebø Camp, near Egersund, Norway. Photograph by Dr. Bruce A. Tocher

The bodies of the men were buried that evening in an unmarked grave in the sand dunes at Brusand. However, a local Norwegian civilian secretly observed the burial and was later able to alert the Allied Authorities to the burial location.

At the end of the war, the remains of most of the soldiers were reinterred at the Commonwealth Grave section in  Eiganes  Cemetery in Stavanger where remembrance ceremonies are still each year to honour their sacrifice. 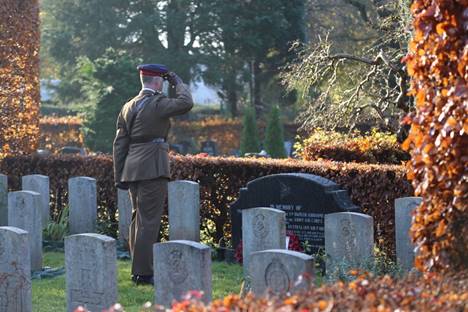 Due to the secrecy surrounding the mission, very little information was provided to the families of the servicemen at the time, other than that they were missing. A short news article was published in a Norwegian newspaper shortly after the raid saying that a number of aircraft had landed in Norway and that all of the soldiers on board had been engaged and killed to the last man. However, it was not until after the war that true horror of the story emerged!

Subsequent War Crimes trials resulted in a number of the German involved in the atrocities being tried and convicted.

Over the years there have been several publications describing the events of Operation Freshman, and the subsequent successful sabotage of the  Vemork  facility by British-trained Norwegian special forces soldiers (Operation  Gunnerside). This action was immortalised in the Hollywood film The Heroes of Telemark, starring Kirk Douglas.

In 2011, Ion Drew published Silent Heroes which, in addition to the details of the raid, also provided a unique insight into the personal lives of the individual servicemen and their families, and contained information based on interviews, correspondence, and meetings with surviving relatives and ex-servicemen who had connections to the operation. At the time of publication, however, details of only some of the men were available. Efforts are now being made to address this gap and to publish a new book on Operation Freshman which includes information on all of the men who took part in the mission.

With this in mind, The Operation Freshman Project is trying to trace any surviving relatives or people who have stories or anecdotes concerning the servicemen who participated in the raid, and who may have photographs, letters or other documentary information relating to the servicemen. The idea is to tell the story of these incredibly courageous young men through their lives, and lives of their families, rather than more conventional histories which focus primarily on the events themselves.

Since the start of 2020, the project has managed to establish contact with relatives of 32 of the 48 servicemen who took part in Operation Freshman.

In addition to the book, it is also planned to stage several commemorative events in Norway in 2022 to coincide with the 80th Anniversary of Operation Freshman. This will include visits to the aircraft crash sites, prisons, execution sites, cemeteries, and a special museum exhibition of Freshman-related artefacts.