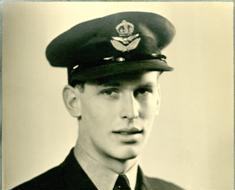 Denys’s nephew, Philip Mileham, has collected a considerable amount of information about his uncle Denys, an RAF pilot who was killed in April 1942. In September 2010, he told Denys’s story to Lynda Abbott, Sophie Clayson and Louise Hays.

Denys was one of 3 brothers and 3 sisters, the children of Edgar and Irene Mileham. He was born in December 1919 and grew up in Boxmoor at Old Fishery House, quite a substantial house at the end of Old Fishery Lane and adjacent to the canal. He had a comfortable childhood. His father worked as a solicitor in London and the family employed 2 maids. The area was much less built up than nowadays and there was a lot of freedom to run round and ride his bicycle. There was a pony in the paddock behind the house. Denys, who was known as Den in the family, got up to all sorts of adventures. For example he was friendly with members of the Brock family who manufactured fireworks. This enabled Den and his friends to make ‘bombs’ with gunpowder and drop them from bridges over the canal.

Denys went to Berkhamsted School at the age of 13 and in 1938, aged 18, he joined the RAF Volunteer Reserve, the RAF equivalent of the Territorial Army.  He learned to fly at Luton which was a small grass airfield in those days. As a qualified pilot he was mobilised as soon as war broke out in September 1939 and joined the RAF full time. He flew Lysanders during his first proper operational activities, planes that were used routinely for taking messages, dropping passengers off and reconnaissance.

He loved his car and also dancing. It was a good way to meet girls. His enthusiasm for life and sense of fun are evident in his letters. For example he used a streamer [a brightly coloured strip of cloth with a weighted pocket at one end, into which messages were put before being dropped from an aircraft] to communicate with his parents. He would fly low over their house and drop messages and even his laundry. On at least one occasion he flew so low that he clipped the top off a tree. One message simply said, “I have been posted at last. Whoopee!” On one occasion a local bus driver called Mr Goss was alarmed to observe a low flying plane dropping a package that landed in the chicken run of Old Fishery House. He reported the incident to a tank officer and after investigation it was established that ‘an RAF officer had dropped the message of some importance to a local resident.’ The incident was reported in the Gazette under the headline, ‘Plane Drops Mystery Parcel’. The streamer became a memento to his parents after Den’s death.

Den flew to France in May 1940, a difficult period during the fall of France and the evacuation from Dunkirk. He was there for a week during which most of his friends were killed. After the general chaos of these events his Flight was re-formed at West Malling in Kent.

In July 1940 Denys converted from Lysanders to Spitfires and was brought down from his station in the north of England to take part in the Battle of Britain as part of 41 Squadron. His squadron had at least two claims to fame. The Squadron Leader was called Findlay who was a hurdler and had taken part in the 1936 Olympics in Berlin. 41 Squadron was the first to claim 100 kills in the Battle of Britain.

In February 1941 Denys was sent to Grangemouth in Scotland to train other pilots. The reason is not clear but he was an experienced pilot by now and would have passed on his knowledge to others. Also pilots needed to be rested after the stress of battle. His letters from this time complain of the cold, especially as the showers only had cold water. He also really missed his squadron and found the experience quite miserable. He was then moved to Wales where he trained Neville Duke who later became a fighter ace and broke the world land speed record flying a jet plane.

In March 1942 he was posted to 234 Squadron, a squadron which included several Danish pilots. He was a Flight Commander (in charge of a flight of 4 aircraft). He wrote to his parents saying that, “The boys in the squadron are a good crowd so I am pretty happy.” His last letter referred to his brother Frank who had been fighting the Japanese in Malaya and was in Singapore when it fell. He and about 20 others decided not to surrender. They hid for about 10 days and then got a boat to Sumatra and finally made it to Ceylon (Sri Lanka). Den had just heard that his brother was still alive. It must have been a huge relief to know that Frank was alive after he has been missing for 3 months.

On April 15th 1942 his squadron set out to escort a bombing raid on Cherbourg. On the return journey two planes were shot down over the Channel, one of which was Denys’s.

"The Squadron gave close escort to nine Boston Aircraft in attack on Cherbourg harbour. Six of our Aircraft were attacked as they left the target and by Me. 109s. F/Lt. Mileham and P/O. Simon are missing from this operation. Subsequent searching by our aircraft and Lysanders failed to report anything of interest."

According to the Operational Record Book he took off from RAF Ibsley at 15.55 in Spitfire Vb AB987. From lists of Luftwaffe claims in the area, it seems likely that he was shot down by either Oblt Egon Mayer or by Uffz Werner Beckers of 7./JG 2.

His parents received a telegram saying that he was missing and that a letter would follow. Five days later a letter came from the Air Ministry indicating that they did not know what had happened to Denys. There was still a chance that he had survived and he could be a prisoner of war. An agonising wait followed until six months later they were notified that all efforts to trace him had failed and he was presumed dead. He was 22 years old.  Denys Mileham is commemorated on the RAF memorial at Runnymede.

(Material from interview with Eric Kemp by Richard Grayson, May 2020.)

Eric did not know Denys personally due to their age difference of roughly nine years.  However, Eric’s sister and friends knew the Mileham family.  Eric remembered, ‘Denys was famous.  When he was training as a pilot, he and his instructor would land their biplane, their old Tiger Moth, in a field alongside Chaulden Lane.  […. ] The Milehams lived close by, so Denys and his instructor with their parachutes on their back apparently, would walk round the lane to have a coffee with his mother.  They did that not once but several times apparently.’  Eric continued, ‘Once or twice, when it had happened in the summer holidays, us children would be on our bikes and round there like long dogs, clambering all over the plane.  It was just left there in the field until Police Constable Lord arrived.  PC Lord was our local bobby and of course he then chased us off.’