Son of William and Alice Elizabeth Newman, of Hemel Hempstead.

William, known to his friends as Bill, was a pupil at Hemel Hempstead Grammar School from 1933 to 1935. He was in Tudor House and played cricket for the first XI. When he left school he went to work in the labs at Cooper, MacDougal and Robertson in Berkhamsted.

He probably trained as a navigator in Bomber Command and was shot down and killed on 15th October 1944 aged 20, on his 11th operation which was a daylight raid on one of the U boat pens on the Atlantic coast of France – perhaps at Brest. (Source: memories of Peter Hodgson, an ex-pupil).

He lived at Great Gaddesden and is buried in St Peter and St Paul churchyard in Little Gaddesden. 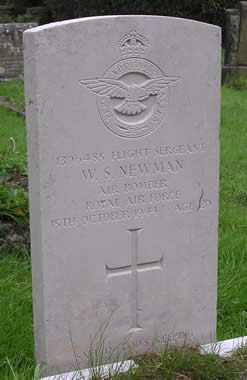