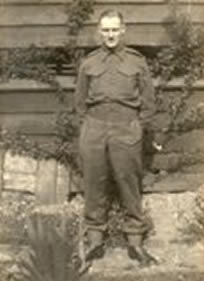 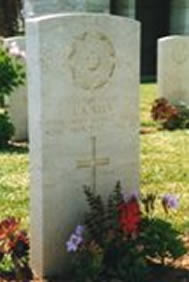 Joseph Keen was among the first pupils of Hemel Hempstead Grammar School.  Known as ‘Joe’, he was killed in Tunisia when the truck he was driving ran over a mine.  His nephew, Michael Waterhouse, remembers:

Joe was a driver in the Royal Army Service Corps. He brought supplies from the port or whereever they were landed, out to the troops on the front line. I can remember my Dad reading one of Joe’s letters saying they had sandbags on the floor of the cab underneath them in case they hit a mine and it exploded. It would take some of the blow. But in fact that’s exactly what happened to him. He drove over a mine and was fatally wounded and died about a week later.

… One or two letters he received from my Mum were sent back with personal belongings. He would have had them in his kit when he was killed. He also had 3 penknives for some reason and a little lucky charm, a silver boot that came back with his belongings. Unfortunately not all that lucky. There was also one letter that I wrote him – the first letter I ever wrote and the last he received.

My grandparents received two telegrams, one to say he was wounded and another about ten days later to say he had died of his wounds. I was about 5 years old. I can remember the whole family going down to grandma and granddad’s house and even though I didn’t realise what death was or anything like that I could still sense the grief and sadness. I couldn’t understand really what was going on. It’s the only time that I saw my Mum cry.

... The effect on the family was pretty devastating. My grandfather died about five years later in his mid-fifties. It was said he never really got over the loss of his son. He was the only son. Fathers built up businesses in those days for the benefit of their family and hoped to pass it on to a son. He just gave up after that.

You learn about wars and battles and dates and who did this and who won that but nobody talks much about the devastation it brings to families. That’s what memorials are for. They’re not for the guys who have been killed but try and make people remember and think about what these guys went through and what their families went through.

Read more of the interview by Pippa Carr here.

We have been provided with copies of letters to/from Joe Keen.  These are a letter from his nephew, Michael, and a letter in response from Joe (to Michael then aged 5 and Michael's sister Margaret, aged 3), sent about six weeks before Joe was killed. 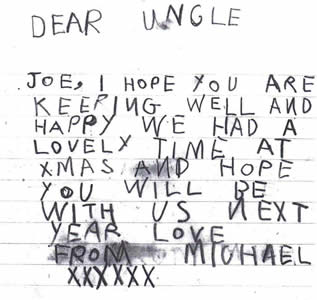 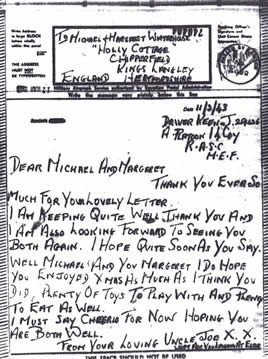 This report of Joe’s death appeared in the Hemel Hempstead Gazette and the Watford Observer.

The fullest sympathy of the villagers will be extended to Mr and Mrs G. J. Keen and family, of Kings Langley, in the loss they have sustained by the passing of their only son, Joseph Arthur Keen, as the result of wounds received while on active service in the Middle East. The deceased, who was in his 23rd year had served for two years as a driver in the Royal Army Medical Corps.*

On Wednesday of last week the War Office notified his parents that he had been seriously wounded and then this Tuesday stated that he had succumbed to his injuries.

He was well-known and highly respected, greatly beloved by all whose pleasure it was to know him. Prior to joining up he had assisted his father, employed as the village butcher, and all will share the regret that such a promising career has been cut short.

*[This was a mistake. Joe served in the Royal Army Service Corps.]

As discussed on this page, it is unclear why Joe Keen is not listed on the original school memorial.