Former Hemel Hempstead School pupils, David and Simon Broomfield, both served in Afghanistan with the Royal Anglian Regiment, while David had earlier served in Iraq.  Simon was seriously wounded in Afghanistan.  They were interviewed in June 2010 by Samantha Rees and Helena Mansbridge.

David described an incident when:

We moved into a built-up area and there were two or three gunmen that were just popping up shooting at us and we tried to move out and got shot at and couldn’t move because 5 and 7 Platoon were being engaged on the road and they were firing out on both sides. You can’t move into fire so we were stuck in this compound. We did try to push out - ‘Let’s go,’ flat-footed down the road, moving and breaking into a bombed compound. Kick the door in - on to the next compound. So, as we were about to do that, there was an almighty explosion on the back side of the compound and everyone got blown off their feet. There was dust everywhere and I remember thinking, ‘Oh crap, not everyone is going to stand up - we’ve taken casualties and what are going to do now?’

Simon described how he was injured:

We were in a village about 12ks north of our patrol base. We got helicoptered in there to go into a compound. Again, we paid the locals compensation and chatted and it was perfectly friendly. We had some ANA with us so there was this Afghan face with it all. What we were trying to achieve was a bit of a presence - get the ISAF presence a bit wider and shake the Taliban up a bit. It’s just one of those things. If you stay there for two years most people would get an injury of some sort. That operation where I got injured and the guys that got killed - we could have done nothing better and nothing different. We’ve just got to accept the fact that if they can hide in ground where it’s sandy, it’s rocky- it’s easy to hide stuff. You’ve got to accept that that’s the risk you take every time you go out on patrol and you’re minimising those risks every step. But sometimes someone’s going to get hit at some point.

The transcript can be read here. 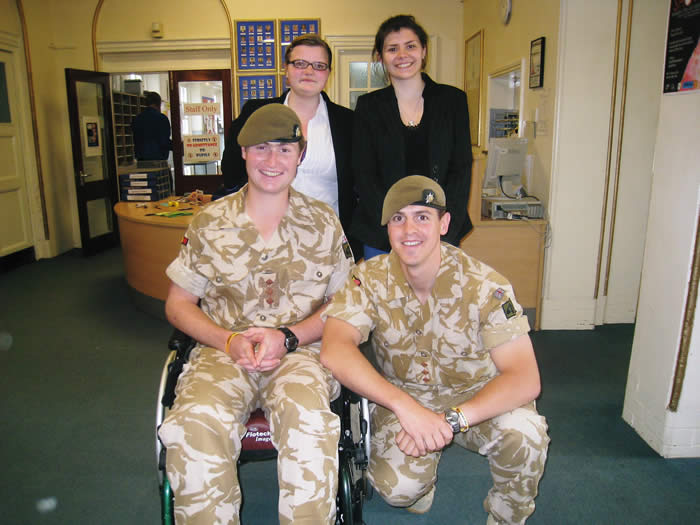 The photograph shows Simon (seated) and David with Helena (back left) and Samantha (back right) at The Hemel Hempstead School in June 2010.