This page contains information on those who served abroad in World War Two.  Read about the 5th Beds and Herts in the Far East in Bernard Lamb's article on this site.

Longer summaries can be accessed by clicking here.  More more information can also be obtained through following the links for each person. 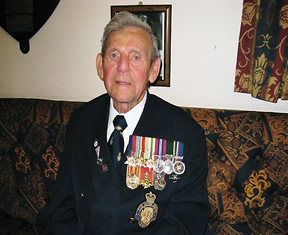 Ken Blake served in the 4th Battalion of the Royal East Kent Regiment at Dunkirk.  He told us how only one quarter of his battalion of 800 managed to get away.  Later, he served in Malta, and was part of 234 Commando Brigade in North Africa.   At one point, a ship he was on hit a mine.  He said, "Hundreds of the lads were drowned but I had had a tip that there were lots of mines in the sea and it was safest to stay at the stern of the boat so I survived.  Later in the war, he was a Prisoner of War in Germany and was very ill with tuberculosis. 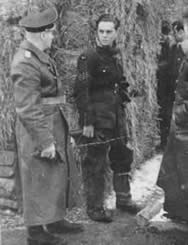 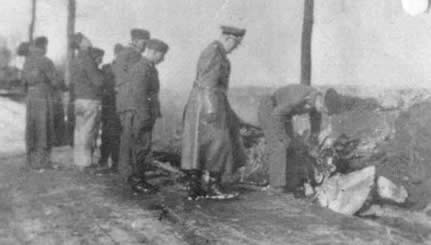 by German forces in February 1941

One of our most compelling and detailed accounts of wartime experiences comes from David Denchfield, who was a pilot during the Battle of Britain and later a prisoner of war.  David was interviewed by Pippa Carr and Laura Dowse, and has also provided written material on his experiences.  In his interview, he recalled the day the war began, and what it meant for him as a member of the Royal Air Force Volunteer Reserve:

We were told that we could pack in our day time jobs. That was the (best) day of my life. On the day that war was declared, mother phoned to say it was on. I started packing up my desk and my boss was suddenly all excited. He said, “Mr Denchfield, what are you doing?” “I’m packing my desk up.” You can’t do that until I tell you to.” I said, “If you stand there in 5 minutes time and you still see me it will be a miracle. I’m off home and I’m now under the control of the RAF.”

His written account describes his experiences of being shot down over France:

Over the next few minutes the radiator and oil temps showed a gradual but steady rise, and I found the cause of the petrol smell, nearly 20 gallons of fuel were sloshing about in the belly of the fuselage under my feet…. My thought was that she'd never reach the Channel and I wasn't about to try to put her down - not with all that petrol washing around, ... I decided to stand on the seat and then kick the stick forward to throw me out, but my planning came to naught. A most expensive sounding noise came from up front, accompanied by darkish smoke and jets of flame, and as I started to stand, letting go of the stick, dear old 'P' helped me to the last. She threw her nose violently down and I shot up and out like the cork from a bottle!

Eric was just 20 when he took part in D-Day.  As part of the 22nd Dragoons Tank Corps he landed at Juno beach with the Canadian forces. His Sherman tank was specially adapted to explode mines as it drove along and its task was to clear a route for the Winnipeg Rifles who would follow behind.  He said, "We were only gone a few yards when there was a blinding flash and the turret filled with smoke. I thought that was the end of us". Eric had an extraordinary experience many years later. He met a man called Roland Lemasson, who as a young boy had been sheltering in a church that Eric's tank had hit on D-day. They became friends. 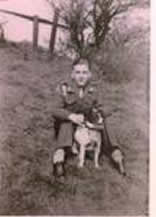 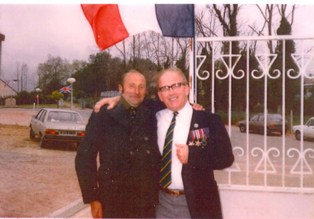 Frederick and Ernest Foskett were brothers who were both taken prisoner, one in France, the other in the Far East. Frederick served in the Royal Signal Corps as a regular soldier having enlisted before the war.  He was captured at Calais in June 1940, as part of a force which was trying to hold off the Germans while Dunkirk was evacuated.  He was held prisoner in Stalag VIIIB for the duration of the war and retreated into Germany with German troops at the end.  Frederick’s brother Ernest served in the 2nd battalion of the Cambridgeshire Regiment which was part of the force in Singapore when the Japanese attacked.  Ernest was taken prisoner and died in Burma in June 1944 while working on the infamous Burma-Siam railway.

Below is Frederick’s identity tag from Stalag VIIIB.

Douglas Goulborn was called to register for military service in February 1942 while on holiday in north Wales.  He chose the navy and had to report to Skegness where training took place in the unlikely site of Butlins Holiday Camp.  There he trained as a signalman.  After being posted to Portsmouth he was soon on his way to Sierra Leone where he found the living conditions terrible, not least because of the heat.  From there, he was posted to a ship of the Free French Navy, the Commandant Drogou, which needed a British signaller so it could work with the Royal Navy more easily.  He recalls that initially “Discipline was nil and the French didn’t really like us. The first day I was on board there was a knife fight.”  He later came to realise how his experiences show how the Allies could work together and he convoyed on this ship for about 15 months before returning to England.  Later postings saw him in India and Burma, where he took part in the re-capture of Rangoon in May 1944. 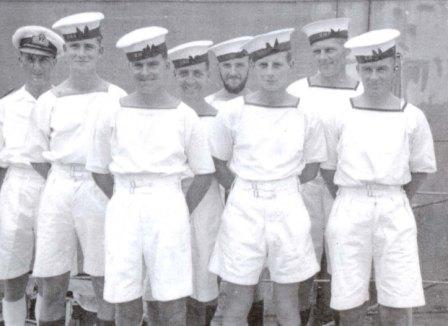 Douglas with his British crew on the Commandant Drogou. He is on the front row, second from the right.

Tony Horton left Hemel Hempstead Grammar School at the age of 16 and volunteered to join the Royal Navy.  He says,  “I went to every continent in the world except America. I didn’t really understand anything about life but I was so keen and wanted to see the world.”   After initial service at sea, “I got taken off a ship because the Navy discovered that I had matriculated with distinctions in German, French and English. After D-day, they were taking so many prisoners they needed people to do interrogation of German prisoners of war (PoWs).” 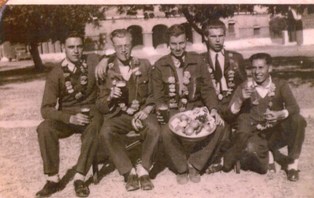 Maurice Maslen joined up in 1942 and after basic training went to the Central Gunnery School for the RAF “where they were training pilots to fire their guns and hit things.”  He was later sent to India for two years, going out on the Nevassa, an old cruise liner.  Those travelling tended to sleep on deck because they had been allocated quarters four decks below the waterline and were worried about submarine attack.  Maurice remembers that on deck, “It was hot but it wasn’t so far to get in the water. Down below you had no chance at all.” 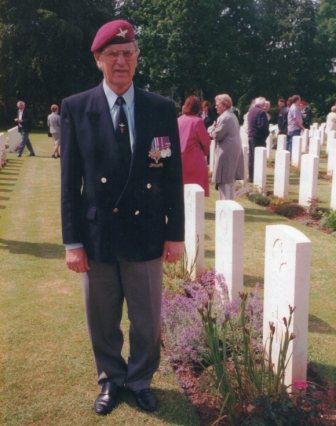 The photograph shows Norman at the Ranville War Cemetery on June 6th 2006.


Norman Skeates volunteered to join the Parachute Regiment in December 1944. After rigorous training, he took part in Operation Varsity, the largest single airborne operation on one day of the war.  His battalion’s task was to clear and hold ground.  After they crossed the Rhine, they went up to Osnabruck and the Elbe.  They were then ordered to push up to the Baltic in an attempt to limit the amount of Germany which the advancing Russian allies took control off.  On the advance, very young German volunteers were encountered.  Norman Skeates recalls, “The Doctor and the Padre encountered German opposition – an anti-tank gun – it was manned by these youngsters. But luckily the Doctor and the Padre went forth and they talked them into surrender. The war ended as we met the Russians. As we went up three German generals surrendered to our Headquarters. They were retreating from the Russians.”

Hemel Hempstead Grammar School pupil Cyril Smith enlisted in the Royal Air Force in 1941 after serving in the Home Guard.  During training he suffered from airsickness and so could not qualify as aircrew.  Instead, he became a radar mechanic, and served in India and Burma.  Of his time in Burma he remembers:

We didn't see a lot of real action because the radar stations tended to be back a bit, not right on the front line. We didn't know the intimate details of what was going on (on the front line) but we were aware of the horrors that some of our colleagues were going through, especially the army. We were very aware of the Burma railway and the way PoWs were being treated. I thought the Japanese were dreadful at that time. I knew someone at school, Bob Bowers, who was a Prisoner of War in Japanese hands. He told a story of PoWs being lined up and executed. The executioners were getting along the road towards him and then they suddenly stopped and he survived. But I didn't have any direct contact with the Japanese.

Eric Summers joined the Royal Navy in 1943.  He told us, “I didn’t see any action.… The ship I was on was HMS Venerable – an aircraft carrier- and we were doing sorties – just patrols. We never fired in anger at all.”  Asked about the enemy, he said:

We didn’t like to know that we had to kill someone but we knew it had to be done. We never had to fire in anger but we would have done it if it needed to be done. What amazes me now is that I was out in the Pacific fighting the Japanese and I’m driving a Japanese car. Doesn’t make sense does it?

John Wright served in the Royal Navy at D-Day on a Landing Craft.  He remembered:

Juno beach was a very level straight beach; very sandy, but they had a lot of shore defences. There were lots of bangs. The navy was firing shells over our heads and there were big armaments on the beach head. We were fired on as we were going in. Even some of the bigger craft were turned over with the explosions and because they had mines on the beach. They had big ‘scaffold’ poles on the beach with mines attached, so if you touched one of these … ! The sea was very choppy so you had to be a bit careful. You didn’t want to end up on one of those scaffold poles.

Later in the war, he was in Singapore on HMS Sussex.  He told us:

Singapore was an experience. We had a kamikaze attack in the straits of Malaya. It was frightening but luckily he had unloaded all his bombs before he hit us so it was just structural damage he did. It was just on the port side. We had guns going to bring him down but he made a straight line for us.

Charles Price served in the Royal Army Service Corps.  He was called up in 1940 and eventually served in western Europe following D-Day:

We followed the troops up and then stopped in Belgium and had various workshops there. We eventually moved into Germany and I drove a transporter across a pontoon bridge over the Rhine. The Dutch were very hard hit by the war. They had no fuel. They’d run a bicycle down the street. They might be lucky enough to have a blown up tyre at the front but they’d have a pram wheel at the back.