Brian Slade (full name Ivor Charles Brian Slade) was a pupil at Hemel Hempstead School when war broke out.  A contemporary, D.R.S. Collier remembers, “Brian, not a big chap but a clever little footballer, sat his School Certificate examination in 1940 and that year, at the age of 16, left school. Immediately – without his parents' permission – falsified his age as being 18 and volunteered for flying duties with the Royal Air Force.” 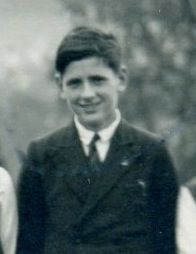 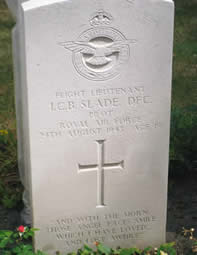 He became a pilot in the RAF. His first posting was at RAF Halton near Tring, where the pilots became known as "the Halton Brats". D.R.S. Collier remembered, “There is a story, not confirmed, that on one occasion he flew a Wellington bomber in a tight, low circuit around the pointed spire of St Mary’s church in Hemel Hempstead to say “hello” to his parents and sister who lived close-by.”

Brian Slade was a bright and intelligent young man and quickly gained promotion to become a Flight Commander in 83 Squadron, which was part of No 8 Group Pathfinder Force, based at Operation Wyton.  The job of a pathfinder was to pinpoint targets and mark them with flares to indicate where bombers should drop their loads.

Some years ago Joan and I attended a local lecture on the Peenemünde raid [17/18 August 1943]. The first slide that came up showed Group Captain Searby and his two (un-named) flight commanders. We immediately recognized Brian as one of them. I also wrote to Walter Thompson who served with Brian and told him what I remembered of Brian from his school days. He replied that he did not know that Brian was a Halton ‘brat’ as the apprentices were known, but went on to say that that would have explained his closeness to Searby, also a ‘brat’.

The following is an extract from the book Lancaster to Berlin (1985) by Walter R. Thompson DFC & Bar, where Thompson remembered:

Slade … always sang the loudest, drank the most and told the funniest jokes on the nights out. I think too that he was loved by most of the WAAFs for he was another who refused to obey the non fraternisation rule.

He also wrote of a night out in Cambridge with Slade when they came across:

Clark Gable, a gunner with a nearby Fortress Squadron, with his foot up on a brass rail of a pub near King’s Parade, his hat bent correctly at the peak and olive green trench coat turned up at the collar; we were impressed to find a movie star who actually flew on operations, he flew about 5 of them and of course was not alone.

Brian Slade’s was a most tragic death because he was killed on the 59th operation out of the 60 he had volunteered to do. He had undertaken a double tour of duty rather than the 30 flights that were the norm. His plane was hit by flack over Berlin on 24th August 1943 and exploded.  James Moss from Hemel Hempstead School studied the operations book for Brian's squadron on microfilm at the National Archives in Kew in 2010. It shows that Brian was based at RAF Wyton and had only spent a few months with Lancaster "A". The record states simply that he took part in a bombing raid over Berlin and did not return. The planes involved in this raid began their flight at 20.21 hours and the last one to return arrived back at 3.27 am.

Walter Thompson recalled in his book:

Brian was a good friend and I felt his loss keenly….  We called Brian “The Boy Slade” because he was our youngest pilot…  It was probably Slade whom we saw hit as we entered Berlin because we saw an aircraft far to the north of us, coned in searchlights; it blew up in a shower of red Target Indicators. This, after the long flight across Germany, and after we reached the bomb – run I couldn’t understand what this aircraft was doing so far north of track. He should have seen Brandenburg on his H2S [radar system used by the RAF], but perhaps it was not working. Slade, having once attacked Berlin on three engines, would have gone on without an H2S.

In his book, The Berlin Raids (1988), Martin Middlebrook wrote:

Another Pathfinder loss was Flight Lieutenant Brian Slade, DFC, a courageous young pilot known on 83 Squadron as “The Boy Slade”, who had set himself the task of flying the “double Pathfinder tour” of 60 consecutive operations. He died flying his 59th, just starting his bombing run.”