The Hemel Hempstead School during WWII

War had a major impact on schools throughout the country.  Teachers joined up to fight, evacuees arrived in many places, and schools took part in military training.  The reminiscences of people who were pupils at what was then called Hemel Hempstead Grammar School are detailed on this page, and longer summaries are available here.  Highlights include fund-raising for a mine sweeper here, staff who served in the war here, memories of refugee children here, here and here, and how petrol shortages affected the journey to school here.  Read of how children sheltered from a German aeroplane here.

Sari Marko-Thaler was a Jewish refugee from Belgium who was a pupil at the Hemel Hempstead Grammar School from 1943 to 1946. She wrote this account in November 2010 with the help of a diary kept at the time. Sari now lives in Israel.

In retrospect I think I ENJOYED my years in school too much. Forgetting that the purpose was not only fun but some education as well!! As a Jewish refugee child I felt absolutely no discrimination and have only the fondest memories of so many wonderful, dedicated teachers. The school was swollen in numbers by evacuee children and as a result a few forms did not have permanent classrooms but wandered about the school into any free room. This caused disruption because, accidently or on purpose, we did not always have the relevant books with us and it meant going to the locker room to get them.

Sonia did not arrive in Hemel Hempstead until Easter 1944, so she missed all but one of the daytime air raids, which meant that lessons were held in the use of the shelter at the girls’ end of the building. However, she writes,

I may have missed the experience of lessons being conducted in the shelter, but, until I left years after the war ended, I did derive some personal benefit from the blast walls. A constant cause of annoyance to me was the staff’s tendency to harass me out of the cloakrooms before I was ready and lock the door. I developed a ploy to defy their authority. I would hide behind a coat on a peg, by crouching on the lockers. Undetected by the cursory inspection of the member of staff, I was locked in. When I was ready to leave, I climbed through the window onto the flat parapetted roof of the girls’ toilet block. From there it was an easy route to the ground, using the blast wall adjacent to the entrance to the block, by supporting my weight with a hand on either side of the narrow entrance. I hope that after 60 years, there is an amnesty for my crime. I was never caught!

Evacuated from London with his parents who were both teachers, John came to Hemel Hempstead Grammar School at the age of 12:

Right from the start it was a transforming experience. Not just because it was my first ever school with girls in it, but chiefly because of its teacher abilities far surpassing anything provided at my previous expensive private schools. We had Mr Harrison for English, Taffy Evans for French (and German?), Quarrie for chemistry, Miss Dale for history, Shackley for physics. There was also geography and maths, can't remember who taught them. The kids were great, friendly and welcoming, and I was assigned a girlfriend first day.

Patricia remembers the first effects of war and the rise of Nazism in Europe:

At first the war had little effect on us except that we had to bring our gas masks. We had to practise going down to the air raid shelter. It was only later that they went down there for hours on end having lessons. We had one or two evacuees whilst I was there. In 1938 we had two Jewish boys who had managed to get out of Austria but they didn’t stay very long.

John Stanbridge, who was part of the school's second intake in 1932 remembers school staff who served in the war:

The younger members of the male staff were called to colours: Mr Doggett (Geography) served in the army in Yugoslavia.  Mr Boucher (woodwork and PE) in the RAF.  Mr Prior (French) in a French medical unit. I believe that he was a Quaker and Conscientious Objector, unwilling to fight; but he acted so bravely that the French Government awarded him the Croix du Guerre. He was a lovely gentleman.

David Stevens started at Hemel Hempstead Grammar School in September 1940.   He told us how pupils did their best to support the war effort:

The school adopted a mine sweeper called the Lord Keith and there was a model of the ship in a glass case at the back of the assembly hall (now PA1). A “farthing fund” was set up to buy comforts for the crew and there was competition between the forms as to how much was contributed.

Jean Stevens was Jean Baxter when she started at Hemel School in September 1939.  She remembers the war bringing new pupils from across Europe:

There were many refugees from Austria, Germany, Poland and Czechoslovakia in the school. One girl had long hair, despite the school rule that hair should not touch the collar of your blouse. She was gently asked to wear it shorter but she said that her father, who had been left behind in Germany wanted her to have long hair. She was allowed to keep it long but wear it tied back in a bow. The staff were very understanding and sympathetic. 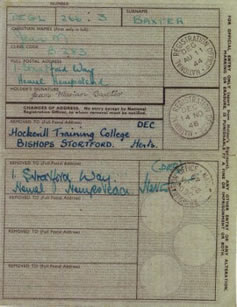 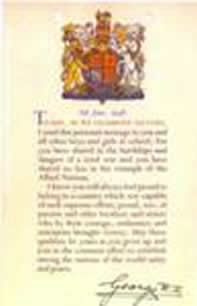 Above left: The identity card belonging to Jean Stevens at the end of the war.

Above right: A certificate presented to children at the end of the war.

As Jill Gledhow, Jill McLeod came to Hemel School in 1941, while living in Kings Langley.  The war had an effect on her journey to school: "I had to travel by bus and as petrol was in short supply it was powered by a contraption on the back."

Mary Letto (as Mary Horton then was) had already been at Hemel School for a year when the war began.  Like Jean Stevens, she remembers refugee children attending the school:

These European children were mostly Jewish. One or two came with their parents but some came by themselves. Their parents went to great lengths to help them escape. They didn’t want to talk about their experiences at first but opened up later and had earth shattering stories to tell. They were wonderful students. They began the school year not speaking English but learned very rapidly. It was a lesson to the English pupils.

On one occasion, the pupils were in real danger:

I remember one bright, blue February day we were playing house matches when two masters rushed out to warn us. A German plane was emptying its guns along the Boxmoor Valley and the children had to get to the shelter. The warning siren went quickly followed by the all clear. It was an incident I remember well.

After being evacuated from Hemel to Wales at the beginning of the war, Hazel Wilkinson attended a grammar school in Wales before she returned to Hemel where she enrolled at Hemel Hempstead Grammar School.  One of her strongest memories is of going down to the air raid shelter: “The shelter felt like a deep dark place. The air raids often seemed to happen at lunch time and we carried our dinner down the stairs. We often had dried peas and I remember that they would drop off the plate and bounce on the stairs as we were walking down.” 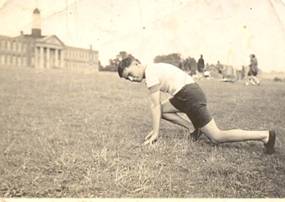 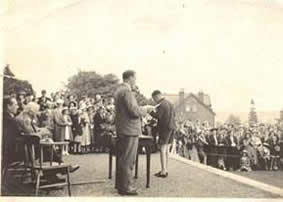 Tony Horton at school and receiving a prize

We used to have house matches on the playing fields and we were playing cricket. This would be summer time in 1940 and we heard a rat-tat-tat in the sky. My imagination tells me I saw a German bomber. There was no air raid warning or we would not have been out playing. We boys dashed for the toilets as it was the nearest place for cover. But our (boys) playground doubled up as tennis court in summer the girls, who had been playing tennis, were much nearer to our toilets and were already sheltering there so we boys were crowded out of our own toilets.

In terms of the war’s impact on Hemel Hempstead Grammar School, it hosted an entire school - Eric thinks it was a Catholic School called St Ignatius.  There was also some drama.  Eric said, ‘We were out one afternoon - house matches, playing football – and it must have been in 1940 […] and we were on the pitch at the top right by the school, and we had been in the shelter during the morning because there had been a raid.  Nothing had happened over [Hemel] Hempstead but because the warnings had gone we all went in the shelter, but we came out and the weather was fine, so they decided we’d have house matches.  While we were playing, we heard a plane, an aircraft in the distance, and didn’t take any notice of it, and quite suddenly it was close by and it started machine-gunning us. [….] I was at the top end of the pitch and all of a sudden everybody who was down at the other end where the ball was, abandoned the ball, and were running like hares to get into the school. [….] I think it was Mr Harrison who was refereeing.  He was shouting to all of us to throw ourselves flat on the ground, and nobody took any notice of him.’  However, nobody was injured and before most had managed to get into the school the plane had gone.  Eric heard the machine gun fire but did not know that the school field was being fired at until the boys at the bottom of the field ‘said they heard the bullets thudding into the ground’.

Eric recalls the school shelter being at what was known as the ‘girls’ end’ of the school on the Heath Lane side.  It was down steps from a corridor in the main building, into what had been the girls’ bike shed which had been ‘sandbagged up and you could get quite a few classes in there’.  When asked about an aeroplane fuselage being in the school for the Air Training Corps, Eric recalled it being there, but he did not use it.  Instead, he was a member of the Berkhamsted Sea Cadets who were being trained for naval service.