Year 12 students at The Hemel Hempstead School have created an exhibition drawing in material from the past decade's work on the 'Hemel at War' project.  The exhibition has been selected to represent the East of England in the national Young People's Learning Hub on World War One, run by the University of Nottingham.  The work produced is be included in the WW1 engage website ‘Community Legacies of the Digital Centenary’ giving other young people the opportunity to explore and learn about these topics.

A team of six year 12s, led by Ed Grayson and including Georgia-Lee Harden, Maisie Hill, Harriet Norris, Annie Martell and Charlie Priest, analysed work produced by previous Year 9s and Year 12s to select pieces they felt best represented the project and the community's experience of the First World War.  These were then turned into eleven banner stands which are being exhibited around the school and will later visit other local venues. 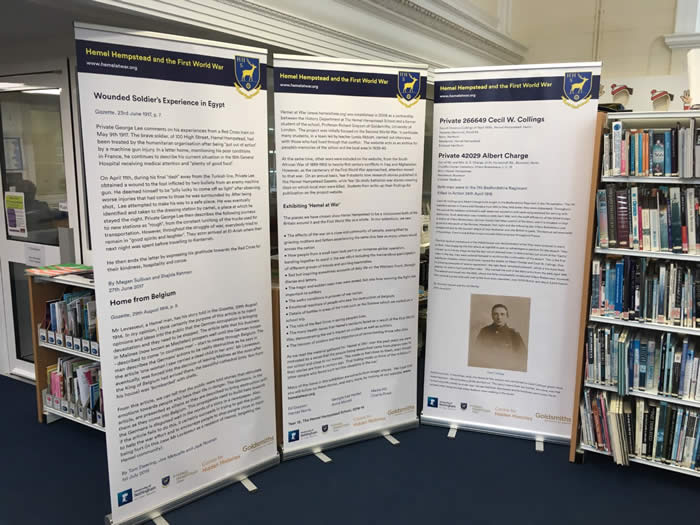 Three of the banners on display in the school library.

The pieces we have chosen show Hemel Hempstead to be a microcosm both of the Britain around it and the First World War as a whole. In our selections, we saw:

• The effects of the war on a close-knit community of people, exemplified by grieving mothers and fathers experiencing the same dire fate as many others would across the nation.
• How people from a small town took part in an immense global operation, banding together to assist in the war effort including the tremendous participation of different groups of friends and sporting teammates.
• Sad but inspiring eyewitness accounts of daily life on the Western Front, through diaries and letters.
• The tragic and sudden ways lives were ended, but also how winning the fight was important to soldiers.
• The awful conditions in prisoner of war camps.
• Emotional reactions of people who saw the destruction of Belgium.
• Details of battles in areas of the front such as the Somme which we visited on a school trip.
• The role of the Red Cross in saving people’s lives.
• The many health issues that Hemel’s residents faced as a result of the First World War, demonstrating the war’s impact on civilians as well as soldiers.
• The heroism of soldiers and the importance of remembering those who died.

As we read the material gathered for ‘Hemel at War’ over the past years we were motivated by a sense that the people being researched came from places near to our school and close to our homes. This made us feel close to them, even though their stories are from a century ago. That feeling made us think of the millions of other people who faced such terrible situations in the war.

Many of the items in this exhibition are extracts from longer pieces. We hope that you will follow up these stories, and many more, by looking at our website: www.hemelatwar.org

Working on the exhibition also provide an opportunity to update our guide on how the project can be used by other schools and groups, and is available on our home page.