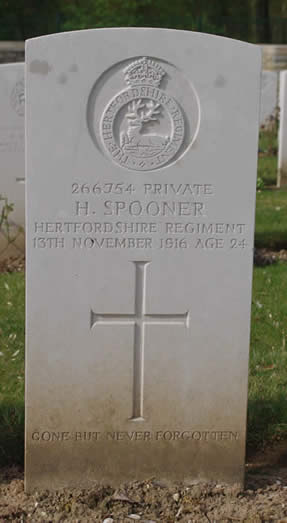 Buried in Connaught Cemetery, Thiepval, Private Harry Spooner, the son of John and Annie Spooner, was killed in action at the age of 24 on the 13th November 1916. His parents lived at 241, High Street, Watford, but he was from Hemel Hempstead and enlisted with the 1st Hertfordshire Regiment. His regiment left for war on the 5th of November 1914. They landed in Le Havre on the 6th November, and spent some time in the Ypres Salient area. Throughout the war, they stayed on the Western Front and took part in many of the major battles including Ypres, the Somme and Passchendaele.

Unusually, the war diary section for the day of Private Harry Spooner’s death contains the details of two days of events, as it covers the Battle of the Ancre. The Hertfordshire Regiment were involved in several of the Somme battles, including the battle for the Ancre Heights in October, as well as the Battle of Ancre in November in which Private Harry Spooner was killed. The Battle of Ancre was the final phase of the first battle of the Somme. The idea behind it was to attack the line along the Ancre River, that had been unsuccessfully attacked on the first day of the Somme, with the hope of driving the German forces back. Due to bad weather conditions, this attack had been put off repeatedly; it was decided that, instead of attempting to advance five miles, (which came from the original plan at the beginning of the Somme), they would attempt to capture Beaucourt and push the Germans back two miles instead. They split the aims of the attacks into different sections: the first being to advance 800 yards, which would involve the capture of three trenches; the second to capture the second line of the German army and the third to capture Beaucourt.

On the 12th and 13th of November 1916, the war diary informs us that in the evening of the 12th, the 1st Hertfordshires left their billets (where they had been staying) and marched to Schwaben Redoubt to form lines. There the Germans had a strong line of around 600 yards long and it consisted of trenches and dug-outs with the protection of many machine guns. The battalion formed four lines. At 5:45am, just before dawn, there was a thick mist and machine guns began to fire, while the battalion moved forward, with the Cambridgeshires on the left and the 19th Division East Lancashires were on their right. Some records suggest that heavy artillery was also used here, which made the conditions harder to move through. They were able to keep to the objectives and soon had captured the Hansa line. They had advanced 1600 yards, and took 250 German prisoners.

The 1st Hertfordshires had to consolidate the new line, which they held until the night of 14th/15th of November. Private Harry Spooner was killed in the capture of these lines on the 13th; however, it is possible that he was killed once they had captured the German lines. The Germans did make three raids against the bombing posts, to the left of the battalion before they were pushed back. In the operation, they managed to capture 9 machine guns. On the night of the 14th/15th, the battalion was relieved by one of the King’s Own regiments, (unspecified), and they marched back to huts near to Aveluy; all platoons had left by 5:00am on the 15th November. The Battle of Ancre cost the battalion the lives of 20 men, including Private Harry Spooner, and 115 were wounded, 7 of whom were officers; on the 13th, the battalion had also gained two more officers, neither of whom were killed.

The name Ancre actually comes from the river that runs from Albert and joins with the River Somme, near Corbie. It also runs through the villages of Beaucourt (the capturing of which was the objective), Aveluy (where they moved back to) and Authuille. The Battle of Ancre, was actually partially successful overall, (not just from the perspective of the 1st Hertfordshires) as it made gains to the north of the river; some of the other regiments were able to capture Beaumont Hamel, one of the primary objectives for the operation. Aveluy is the first village along the Ancre River to the North, which explains why the troops moved back there. The village itself has a war cemetery from the First World War and, as it was one of the villages involved in the Somme, it often passed between British and German hands. The cemetery was used during the early Somme battles, to bury the mass number of dead soldiers. The town was used for a hospital and a military barracks. The cemetery today contains 380 burials, with 172 being unidentified; there are also 20 casualties that have special memorials. The main difficulty with large battles was to bury and identify the large numbers of the dead.

The town was rebuilt due to the mass destruction that took place in World War One. It also held a famous Crucifix, on Crucifix Corner during the war; this was eventually destroyed in World War One, but was later rebuilt. This corner was special as it had a junction of roads leading to Thiepval, La Boisselle, Ovillers, and Contalmaison, making it particularly busy, as well as having large strategic value to both sides. It was also used as a quarry during the war, a source of useful materials, again adding to its value to the troops. 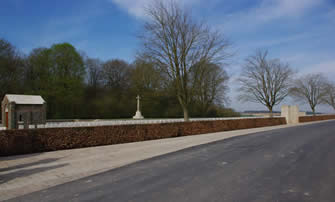 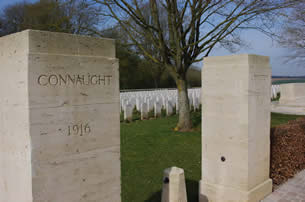