On the morning of the 11th of July 1916 the 2nd Bn Bedfordshire Regiment managed to take most of Trônes wood but at lunchtime the Germans forced them back out of the northern half. It is believed that Stanley Picton died in action 11th  July 1916, 3 days after the attack Trônes wood began, he was one of a total 3,287 men to be killed or injured during the attack.Britain occupied the South end of the woods. Germany quickly got their artillery to work and the Battalion suffered many casualties entering the wood, but by 3.45 a.m. the whole Battalion had gained the inside of the wood, but owing to Machine Gun and shell fire they had entered rather too much at the Southern end.

At 1.30 am the 2nd Bedfordshire Battalion were in position, formed in lines of half companies with an interval of five paces between the men, and a distance of 150 yards between Platoons (in the order of company “A”, company “B”, company “D” and company “C”) . Orders had been received that the Battalion was to enter the woods at 3.27am, so the leading lines commenced to advance at 3.10 am towards the South Eastarn edge of the Trônes woods.  Since it was almost dark, the advance was not observed until the leading line was 400 yards from the woods, when enemy machine guns opened fire. The Battalion suffered many injuries entering the woods, but by 3.45am the whole Battalion had gained the inside of the woods.

By 4.20am one of the Platoons had reached the North Eastern side of the woods and commenced to dig in. As no previous British troops were holding the Northern end of the wood, this party became isolated and the Germans  were seen advancing from the Longueval direction. By 10pm two of the Platoons had been forced to withdraw, leaving “C” and “D” holding out against all counter attacks.

During the attack of Trônes woods, many British soldiers went missing and presumed taken prisoner, Picton does not have a gave which suggests his body was never found but, Picton can be commemorated at the Thiepval Memorial, Pier and Face 2 c. There is also a ‘closer to home’ memorial in Apsley Mills by the train station. 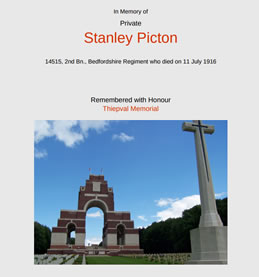 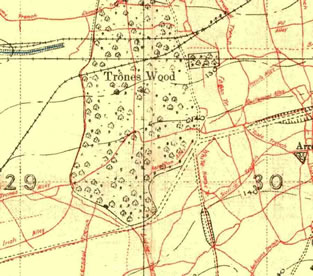 By Maisie Hill and Lucy Kyne