Edwin Morgan was born in Bovingdon, Hertfordshire. His parents are recorded as Amos and Ruth Morgan, of 4 Manor Avenue, Apsley. He himself lived in Berkhamsted, where he enlisted in the 2nd Battalion the Bedfordshires, the same unit as all the other men in this section of our website. Morgan died during the long and bloody battle of the Somme, near the village of Guillemont.  Although he died of wounds on the 1st of August he was most likely mortally wounded the day before, on the 30th of July, although we cannot say for certain at which point during the day, or indeed that his wounds occurred on the day, he could have lain in a hospital in Paris for weeks with blood poisoning, having received injuries at an earlier date, or more likely died in a casualty clearing station or field hospital a few miles behind the lines, as the records only show when a solider died, and not the date he received his wounds.

The 2nd Battalion the Bedfordshires were to attack the German line on July 30th, near Guillemont, about 10 km east of the town of Albert, in support of the 17th and 20th battalions of the Kings Liverpool Rgt. At 10 pm on the 29th the battalion moved to assembly positions south of Bernafay wood (see map), and were in position by the early morning of the 30th. The unit was subject however to poison gas attack, although what type of gas is not recorded in the war diary, and the men were forced to don “smoke helmets”. A number of officers and men suffered from the effects of the gas and this is possibly the first event where Pte. Morgan could have been mortally wounded.

At 3.30 AM A company form up in the sunken road (see map), and at zero hour (not specified) launch an attack on Maltz Horn Trench and farm, advancing in two lines and achieving “great success”. Indeed the company, led by Lt. W. White achieved their objective, liquidating 70-80 enemy troops and capturing 1 prisoner, at the cost of 30 casualties. It is impossible to tell which company Morgan served with, so it is possible that Morgan was a member of A co. and was one of these 30 causalities. After the successful attack the company then fell back to their starting positions at the sunken road, seemingly making the whole endeavour rather futile, or at least this is how the men fighting and dying may have perceived it. 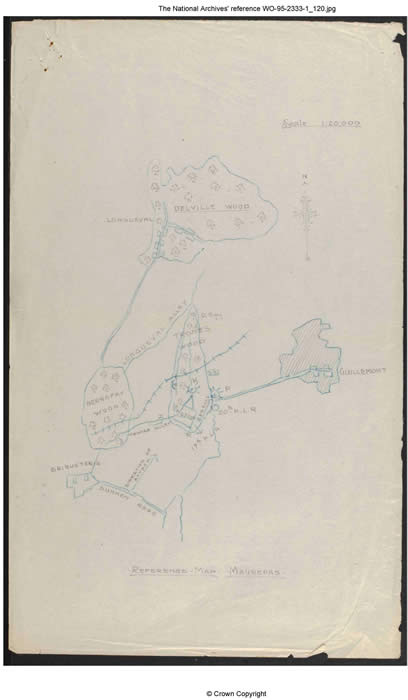 At 5.45 AM the whole battalion moved up to the south of Trones wood, but the attack was hampered by dense fog, causing much confusion. B and C co were temporarily attached to 17th King's (Liverpool) Regiment. At 10 AM orders were given to A co to dig in south of Maltz Horn Farm, bridging the gap between the British and the French troops on the Battalions left. B and C companies, released from the KLR moved up to Maltz Horn trench, previously cleared by A co earlier that morning, and extended the trench 300 m to Arrowhead copse. D co dug in in the gap between A co and the Farm, and by 7 PM all units of the 2nd beds were dug in and holding Maltz Horn ridge.

Heavy shelling throughout the day was most likely the cause of Morgan’s wounds. The war diary lists 6 officers and 166 other ranks as casualties; Morgan could have been one of these, but as previously mentioned it is impossible to tell.

Edwin Morgan died in the battle of the Somme, one of 481,842 British casualties and 1,332,156 total casualties. The battle raged from 1st July to 18th November 1916 and resulted in an allied advance of about 6 miles (9.7 km) across a front of 16 miles (26 km). This means a proportion of humanity equivalent to the entire population of Liverpool’s larger urban area died for an advance slightly less than the distance from Watford Junction station to Hemel’s ‘Magic Roundabout’ across a front roughly equal to the distance from Watford to Tring.