Son of the late Henry Chauncy Masterman and Alice May Masterman, of Rough Down, Boxmoor, Herts. 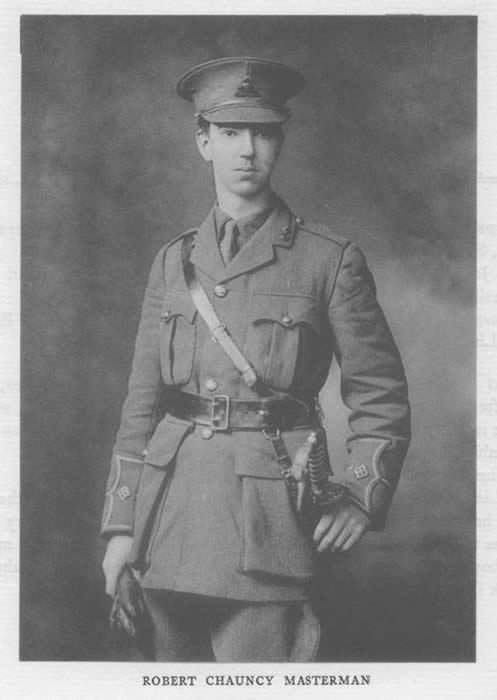 Robert Chauncy Masterman was born on 23rd January 1896 and enlisted as a Private in the Bedfordshire Regiment about a month after war broke out.  His personal records show that he was relatively tall for the time at just under six feet, with dark hair and brown eyes.

After initial training he was sent first to the regiment’s 7th battalion, and then the 6th, both of which were in England.  When he had enlisted he was still at school, preparing for university entrance, but he had served in his school’s Officer Training Corps (OTC).  His school was Harrow, the famous public school, which would have meant that he came from a wealthy family.  His background and his time in the OTC meant that he was soon picked out as being a potential officer.  During his training he applied for university, winning a scholarship to Hertford College, Oxford, which would have been taken up after the war.

On being made a Lieutenant he joined the 9th Royal Lancashire Fusiliers which left Liverpool aboard a ship on 5th July 1915, headed for the Gallipoli Peninsula on the coast of Turkey where Britain was fighting the Turkish army.  The battalion arrived there on 6th August 1915.  Conditions were very tough there, with many men falling ill, and after nearly two months Masterman’s time at Gallipoli was cut short as he caught dysentery which led to serious diarrhoea.  He was sent back to England on 3rd October 1915 on a ship called the Carisbrook Castle.  The sea voyage lasted just over three weeks.  Masterman was in hospital in Oxford until January 1916 when he was fit enough to join another battalion of the Lancashire Fusiliers, the 19th, which had been in France for two months.  [Source: National Archives, Kew, WO 339/14147 File on Lt. R.C. Masterman; Harrow School Magazine.]

On 1st July 1916, the 19th Lancashire Fusiliers were part of the advance on the Somme, in the area of Authille Wood, close to Thiepval.  When they arrived in the wood they heard from another battalion (1st Dorsets) which had been in an earlier stage of the attack, that British losses were heavy, but there was no question of turning back.  As the battalion left the wood they came under heavy German machine gun fire.  On reaching the first line of German trench taken by the British they found that it was so crowded with men who had tried to advance earlier that it could take no more soldiers.  They sent a message back to the Brigade headquarters and were told simply to wait and not to send any more men forwards.  Masterman had already been killed in this initial advance.

The battalion held its position until being sent back behind the lines for rest later in the evening of 1st July.  Of the 20 officers and 577 men who had gone into battle in the morning, about half were casualties of whom two officers and 38 men were dead.  The battalion war diary noted, “Throughout the operation the Battalion behaved with the greatest steadiness, and the advance was carried out without hesitation on the part of the men – in spite of the intense artillery and machine gun enfilade fire.” [Source: National Archives, Kew, WO 95/2394, War Diary of 19th Lancashire Fusiliers.]

Masterman’s Captain sent a letter home to his sister which said, “He was killed when leading his men to attack the enemy trenches.  The ground we had to cross was swept by heavy machine gun fire and I am sorry to say that your brother was hit just before he got up to the enemy’s wire.  He led his men with great dash and was such a brave fellow.  He had not been with us long, but during that short time he had become most popular with us all.” [Source: Harrow School Magazine.]

Masterman's name on the Thiepval Memorial