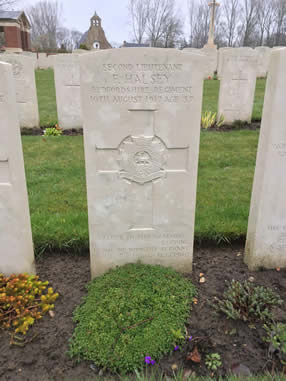 The 7th Battalion of the Bedfordshire Regiment was formed in September 1914. They were part of Lord Kitchener’s 2nd army of 100,000 men and were joined by 1000 Officers and men from the 6th Battalion. For training, they joined the 15th Scottish Division and were moved into the 54th Brigade of the 18th (Eastern) Division, with whom they travelled to France. They arrived in July 1915 and the whole regiment gained an impressive reputation, as they served in many major battles: although these cost the lives of 830 men and caused 3,500 casualties. Towards the end of the war some of the battalion were moved, whilst others went on to train the arriving American troops. Most of the troops in this battalion were from the South-East of England, including Fredrick Halsey.

The son of David Daniel and Mary Ann Halsey, of 3 Frithesden, Hemel Hempstead, 37-year-old Fredrick Halsey was killed in action of the 10th August 1917, in The Third Battle of Ypres. He was husband to Esther Halsey - who lived on 7 Wellington Street, Bedford - and was a Second Lieutenant in the 7th Battalion of the Bedfordshire Regiment. He joined B company of this regiment in early 1917 and was believed to have been in the left of the company during the assault on Glencourse Wood, in which he was killed. He was initially reported as missing (which was not unusual during battles), but was later found and buried 4km from the centre of Ypres, in Hooge Crater Cemetery. He is also remembered on the Potten End War Memorial.

On the day he was killed, the 7th Battalion attacked German Positions in Glencourse Wood, near Inverness Copse. It took the lives of around 260 men and officers. The war diary tells us that the aim was to capture Westhoek a region that covers part of Belgium and France. On the 10th August, all companies of the regiments involved had moved into attack lines by 3:30am, with zero hour (attack hour) given as 4:35am. The company in which Fredrick Halsey was said to be in, was positioned to the left, next to C Company. A company was to be used for close support and D was the reserve Company, placed in Jargon Trench. It is stated that the event of forming lines was done under heavy enemy artillery fire as well as machine gun fire but the men proceeded in a ‘steady manner’. The commanders are even recognised for this, particularly for being ‘cool’ and for moving the men in a ‘deliberate manner’. When zero hour came, the ‘intense’ British barrage opened up and the companies stuck close to it - using the technique of a creeping barrage - to hide themselves from enemy eyes. By 5:13am, the troops had reached Nonne Bosschen Wood and all the objectives had been met. Within the next hour, machine guns and other equipment were dispatched to the new front line, to help them to consolidate their positions. They spread out along the line and tried to get as close to Germans as possible, usually about 200 yards away.

However, two other battalions were present, with the 11th Royal Fusiliers on the battalion’s right and Queens even further to the right. They were involved in particularly heavy fighting in the North- West corner of Inverness Copse, but unfortunately the troops became confused and had to fall back to a line ‘running along the ridge from the South West corner of Glencourse Wood’ to a further junction. It meant that the Bedfordshire’s right flank was exposed and D company was moved forward to make a defensive flank.

Later on in the day, there was very severe fighting due to the positions of the troops. At 5:30pm, the Germans began to move into place, showing an increasing likelihood of a counter attack. It began at 6pm and by 7pm the troops were facing a difficult situation, due to the mass German attack and the British troops running low on ammunition. The Germans used rifles and machine guns to try to break through. This continued until 9pm, by which time the Bedfordshire regiment had lost all connections with the advancing troops, but had maintained their own positions. The Germans also sustained a large number of casualties.

At 8:30pm, the 6th Royal Berkshires were sent to relieve the Bedfordshires and a Norfolk company was sent to take over the South-West corner of Glencourse Wood, which had previously been handed from the Royal Fusiliers to the Bedfordshires. By 2am on the 11th of August the 7th Bedfordshires had been removed and moved back to the Chateau Segard area, where they rested for the morning. By 2pm, the battalion was moved back to Dickebush New Camp.

Another unusual thing that the war diary remarks upon, is that it states that all of the Companies’ duties during this battle were carried out in ‘a glorious manner’. It also tells us that ‘the battalion was famous; its fighting spirit in the past eclipsed all former deeds of gallantry’: when the men were held up due to heavy machine gun fire, many hid behind lumps of earth and fired back at the Germans, over the heads of the British troops who were trying to cut the wire. The war diary also says that many of the Germans who were not hit in the initial attack, called out ‘Kamerad’ and ran forward into the line -even if they were scared and frightened - to try and fight back.

The section of the war diary for August also lists a variety of lessons learned by the company during the battles it faced. This includes for example, if the battalion had been closer together then they may have been able to take more land; another lesson was artillery should not stop firing until the commanders believe that all the troops are where they need to be- this was learnt on the 10th as artillery ended too quickly. The diary also states that the telephone line should be laid past HQ, as it was used for a variety of things and needed to be accessible as it would have also allowed them to communicate with other battalions, thus making a more coordinated attack. There is also further advice on scouting out machine guns and checking towns nearby.

The Third Battle for Ypres had the aim of breaking through to Flanders in 1917. With a war that was fought on so many fronts, commanders made decisions on important battles, with the Battle of the Somme taking precedence over Ypres; but, after the failure of the Somme, the Allies turned their attention to the Passchendaele area. The offensive was launched on 31 July 1917 and lasted until Passchendaele village was captured on 6 November.  It did not lead to the breakthrough that was intended and cost many lives, including Fredrick Halsey. It was the last battle of attrition of the War, following the disaster of the Somme and the controversial tactics that were deployed in both battles.