William Thomas Day was born in Harpenden in Hertfordshire enlisting in Hemel Hempstead under the Bedfordshire Regiment’s 1st Battalion. He was killed in action by shelling or rifle fire on 14th October 1914 in Givenchy-lès-la-Bassée, France during the battle of La Bassée (10th October 1914 to 2nd November 1914).

On 9th October 1914, at 2:15PM, the 1st Bedfordshire Battalion, including William Thomas Day, started without transport towards Haravesnes to be picked up by French motor buses at 7PM. However, no buses showed up that day and they continued to wait by the roadside overnight.

The next day, on the 10th October 1914 the French motor buses arrived at 10AM. The regiment moved through Fillièvres to La Thieuloye. On the 11th October 1914, at 6:30AM the Bedfordshire 1st battalion arrived at Bethune, and finding it to be occupied already by French forces and so moved on. At 2PM, they arrived at Essars, once again finding it to be occupied by French forces, and carried on towards Givenchy-lès-la-Bassée.

On 12th October 1914, the Battalion arrived at Givenchy-lès-la-Bassée and occupied the village with minimal resistance, except little rifle fire and shelling from nearby German forces. However, in the evening the events of the Battle of La Bassée began for the 1st Bedfordshire Battalion as considerate shelling and “enfilade” firing began on their trench. The soldiers positioned themselves in a trench on the east side of the village in an attempted to advance but also hold lines. However, this was met with shelling from advancing German forces and the soldiers not only failed to advance as far as wanted, but also lost 17 men.

On the 13th October 1914 heavy bombardment of both the trenches and the village began, lasting all day and into the early morning of the 14th. At midday, the heavy gunfire (cannonade) began increasing in size and intensity with most houses damaged in the village, as well as continuous bombardment of the church neighbourhood. Later, in the afternoon, the front trenches were unable to hold and eventually the Bedfordshire Battalion was forced to withdraw. In the village, soldiers ability to see had been weakened significantly due to both the dust from the crumbling houses and the continuous shelling from the German soldiers. The Bedfordshire regiment continued to withdraw with eventually the regiment falling back over 300 yards to then form a new line in the north, while the Dorset and Norfolk regiments formed on in the east.

After the previous day’s chaos, on October 14th all newly formed lines were held, however William Thomas Day was killed in action on the 14th October 1914. 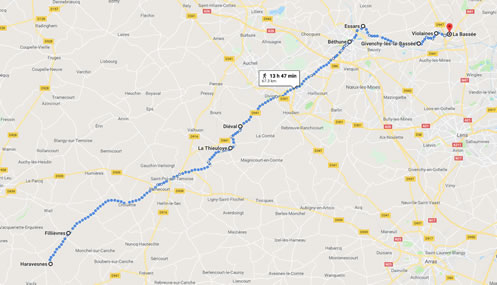 By Jake Brown and Georgia-Lee Harden