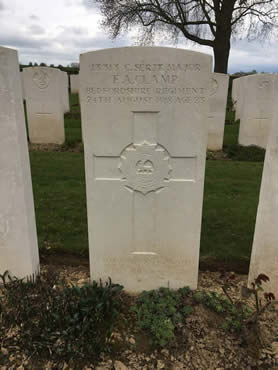 Frederick Arthur Clamp was a member of the Bedfordshire regiment in the 4th battalion.  It was originally a training unit.  It moved within a few days of declaration of war to Felixstowe, for duty with the Harwich Garrison. In July 1916 they were converted for war service and landed in Le Havre.

He was the son of Alice Clamp and was from Boxmoor. He is said to have died on 24th August 1918 however there is little in the war diary that is said to have happened on that specific day.  However, in the days leading up to and after the supposed date of his death there was plenty to report. The 22nd August saw the death of 9 men in an attack on C Company so it is possible he was killed in this attack.  On the 23rd the Bedfordshire regiment advanced to attack the Achiet-le-grand railway and take up a position east of Bihucourt. The 4th battalion reached this positon and were then withdrawn in artillery formation to Leeds Trench. On 24th August the battalion marched in artillery formation to their assembly positions with no casualties being recorded.