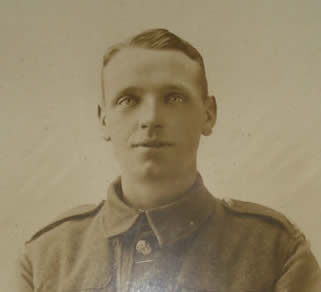 Private William Edward Barber initially served in the Suffolk Regiment.  He was killed at a stage of the war when the allies had just about held off a German advance which had, at one point, looked as if it might lead to a German victory.  That was launched on 21st March 1918 and it was a month before the allies could truly claim to have stopped the Germans. However, even by 24th April, there was still heavy fighting on the front line.

There were two occasions that day when Private Barber could have been killed.  The first, in the very early hours, was when his battalion was shelled with both gas and high explosives, while resting in a wood called the ‘Bois de Blaney’.  Several men were killed during this bombardment.  Later in the day, at 9.15pm, the battalion was ordered to take part in an attack on German lines at Villers-Brettoneux.  Two Australian battalions led the charge, with the 2nd Northamptonshires following behind.  However, during the attack, the British and Australian soldiers became tangled in barbed wire (which had originally been set up by the allies).  Before they found a gap in the line they suffered losses due to heavy German machine gun fire.  Once free of the wire, Barber’s battalion successfully gained some ground.  It was dark by this time which might have helped them to advance, but the Germans fired flares into the sky and this enabled the German machine guns to pick out targets more easily.

Casualties were very heavy and the attack was called off.  Even during the retreat, the 2nd Northamptonshires lost men to more German machine gun fire.  Overnight, the men dug new shallow trenches to allow them to hide from the machine guns.  A British tank joined the battle the next day and this helped to push the Germans back in some areas.