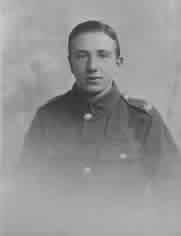 Cecil W. Collings and Albert Charge both fought in the Bedfordshire Regiment in the 7th battalion.

The 7th battalion served in France and Flanders from 1915 to May 1918, (when they were disbanded). Throughout this period the battalion achieved a well deserved reputation and were congratulated for serving with distinction.

Such distinction was notable on 24th April 1918, with the swift efficiency of the Allied troops in action at Villers-Bretonneux. German troops had taken control of the town, which is situated on high ground to the south of the Somme. However, that night and the following day Villers-Bretonneux was recaptured due to the counter-attack of two Australian and one British brigade. The tactical achievements of Australian, French and British troops ensured Allied progress throughout France.

The first tactical manoeuvre of the Allied troops was demonstrated when they were ‘ordered to stand at 4am’. Thus engaging the first attack at nightfall to gain an advantageous position for the assault. They moved ‘up to line by stage during the day’ which allowed them to take position just south of the ‘Cachy’. In a different unit to the 7th battalion, tank corps were dispatched on the Cachy switch line, this was by the three British Mark IV tanks from the 1st Battalion. At this point, the 7th battalion was able to form a plan of attack to take place at 10 pm under the ‘intensely dark’ night. The advancement was formed with the British soldiers on the right with support from the ‘Australians on the left’.

The Battle of the Avre saw the first battle of two tank forces as three British Mark IVs met the German A7Vs. However, this diary entry does not address the use of tanks, only describing the ‘heavy machine gun fire’ which held up the the battalion to their right for the first 1000 yards. Also, this was only described as ‘slight opposition’ to the battalion as they continued to move forward on the assault.

From this stage, the ‘reserve Company’ were ordered forward to reinforce the continuation of the assault. This is the first significant situation which could have caused the deaths of Albert Charge and Cecil W. Collings. Luckily for the 7th battalion, the German troops did not perform a flanking maneuver on the Allies ‘two exposed flanks’. In order to prevent becoming vulnerable from the threat of a German maneuver, ‘the left company of battalion was ordered to withdraw’ hereby ensuring that they conformed with the line of the left battalion. Due to growing pressures of ‘enemy opposition’, the right flank ‘remained exposed’, which is the most likely position to which Cecil and Albert died.

This marked the end of the diary entry from the 24th April 1918. The assault continued into the 25th, where the Allies successfully recaptured Villers-Bretonneux. However, this came at a great cost with over 2,700 Australian casualties, over 9,500 British and about 3,500 French.

By Dorothy Harper and Emma Morley

Additional note: in December 2018, the Hemel at War project was contacted by Cecil Collings' great-niece, Isabel Seymour.  She provided the photo above and told us: 'The story I heard from my mother, his niece, was that he had originally joined up under age, his age had been discovered and he had been sent home.  He re-enlisted after being handed white feathers when walking in the street.'