This section will be developed at a later stage as we are currently concentrating on World War Two.  However, we have already obtained material on the Boer War and the Korean War below, and an interview with Godfrey Orrell, who served in Cold War Berlin is available.  We also remember Matthew Harrison who was killed in Afghanistan in 2010 and have interviewed brothers David Broomfield and Simon Broomfield, who have been serving in Afghanistan as Captains in the Royal Anglian Regiment.  Ernie Guest recently told us about Lionel Killick who was killed in Malaya in 1951.  More information is always welcome so if you have any material on local people in any conflict please do get in touch through Contact Us.

Five men killed in in conflicts since 1945 are listed on the Hemel Hempstead War Memorial in Boxmoor.  They are Lionel Killick and John Secrett (Malaya 1951-53), G Collins (Aden 1965), and Jeff Bell and Kevin Keoghane (South Atlantic 1982-83).  Further information on them can be found on an external site.

One memorial in Potten End remembers John Charles Miles of the 5th Royal Irish Lancers but is not linked to a specific date.

A memorial to Dodington Egerton, a soldier who died in 1773, is in Little Gaddesden, but it is not clear if the death was due to military service.  Other memorials at St John the Baptist, Great Gaddesden reference relevant service.

Charles Henry Foskett served as a Bugler in the Boer War.  He appears to have first enlisted as a Boy Bugler in 1897 aged just 14, and was in South Africa in 1900 with the 2nd battalion of the Bedfordshire Regiment serving in both the Orange Free State and Cape Colony.

His certificate of service is below: 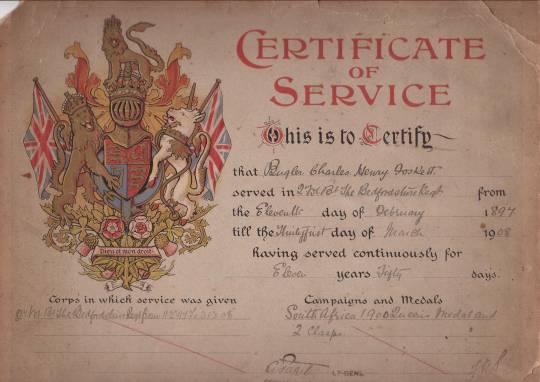 All but one year of full-time service was as a member of the territorial army rather than as a full time soldier and Charles received the Territorial Force Efficiency Medal which was awarded for twelve years’ service.  Although Charles only served for eleven any war service counted as double.  His medal is pictured below:

Charles Foskett was from Berkhamsted (his parents lived at 32 Castle Street when he enlisted for full-time service) but information has been provided by his great grand-daughter Caroline, who lives in Hemel Hempstead.

He went on to serve in the First World War, see here.