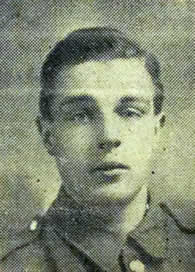 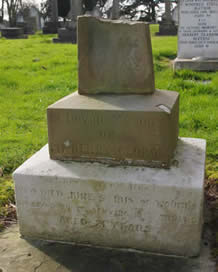 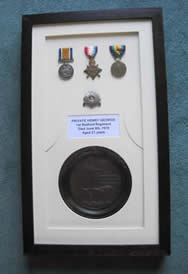 On 2nd May 1894 Emma George becomes a single mother. She was then 28 years old, not married, and no father's name is included on the birth certificate of her child, a boy Henry.  Emma is a charwoman and Henry is born at the home of her elder brother, Tom George, at 56 Cotterells, Hemel Hempstead. Like many christened Henry, to his family, friends, neighbours, the congregation at St John’s Church Boxmoor and fellow workers at Frogmore Mill, Apsley, he was affectionately known as Harry. He was just 20 when war was declared in August 1914. Harry was one of the first to volunteer for military service.

Emma’s father, Joseph George, was born in Great Gaddesden in 1816. He worked as farm labourer on the Gaddesden Estate, In 1849, when he was 33, he married Mary Hart. Mary was 22, a straw worker and had been born in Studham. They stayed in Great Gaddesden for five years, time enough for the birth of their first daughter, Sarah. The family then moved into Hemel Hempstead.

The census of 1861 shows Joseph and Mary living in Union Street, also known as ‘The Middle’ as  it joined  Chapel Street to St Mary’s Road. Three more children, Thomas, Elizabeth and Martha expanded the family. Joseph continues work as  a farm labourer, while Mary, Sarah and even Thomas, then aged 6, are listed as  ‘plaiters of straw’.

Joseph died in 1869 at the age of 53. The census of 1871 shows Mary, now 42, as head of the household.  The family has  moved  again and is now living in Cross Street (Cherry Bounce)  Mary and Sarah, the elder daughter,  are straw plaiters. The younger daughters: Elizabeth 13, Martha 10 and the youngest, Emma 5, born in 1866, are scholars.

Emma’s elder brother Tom  has  moved out  and  is working as a blacksmith.  He  marries Priscilla Wilson in 1878 at the Parish Church, Leverstock Green. They lived there for a little time before moving to Cotterells. Tom worked for over 50 years for Davis &  Bailey, more commonly known as the Boxmoor Iron Works, at their premises in Marlowes.   While her mother  Mary and sisters continued as Straw Plaiters now living in Chapel  Street, Emma went into domestic service, her occupation when Harry was born in 1894.

In 1901 Harry, now 6 a scholar, was living with his grandmother and  aunties in Chapel Street. Emma is  now a live-in General Servant, at a house in St John’s Road, Boxmoor, the home of Cecil Sanquinetti and his wife Ethel. Cecil Sanquenetti  the  paper maker and owner of Frogmore Mill.

In 1911 Harry, now 16, is living with his uncle Tom at 56 Cotterells. Tom continues working at  the Boxmoor Iron Works. Harry is a  general labourer at Frogmore Mill. Emma continues as House Maid to Cecil Sanquinetti and his family. The family  have moved to Three Gables, Corner Hall.  They now  have a daughter Ethel age 9, a cook Alice Clarke aged 19. In addition  Cecil’s sister in law Emily Woodmass  is  living with them.

By August 1914 Harry, now aged 20, continues to labour at Frogmore Mill He is an active member of St John’s church. He is courting his sweetheart Winnie – Winifred Carpenter. Winifred is one of 13 children born to Joshua Carpenter and his wife Mary Anne. The family are living in Grosvenor Terrace, Boxmoor.  Joshua and  Mary  were both born in Boxmoor. Joshua works as a labourer at the Saw Mill. Winifred, 19, is an envelope folder in the stationery department at Dickinsons, Apsley.

Harry is one of the first to volunteer for military service. He joins the Bedfordshire Regiment, 3rd Battalion – the training Battalion, as Private Henry George No. 13616.  The 3rd battalion is based at Landguard Camp, Felixstowe. On completion of his training, in early 1915, he is transferred to the 1st Battalion awaiting  posting to the front. In early March 1915  he is sent to Flanders, just a few kilometres south east of Ypres where the 1st Battalion are entrenched around  the infamous Hill 60.

On the 3rd April Harry made out  a brief hand written will. He is wounded on the 8th May (6 days after his 21st birthday), and dies of wounds on 5th June 1915.  His war had lasted but 3 short months. His funeral  takes place on Wednesday 9th June at St John’s,  Boxmoor and he is buried at the Heath Lane Cemetery.

The Hemel Hempstead Gazette, on Saturday 12th June carried an unusually long (23 column inches), but fitting tribute to the young soldier, Harry George, from Hemel Hempstead, which is transcribed below the photograph. 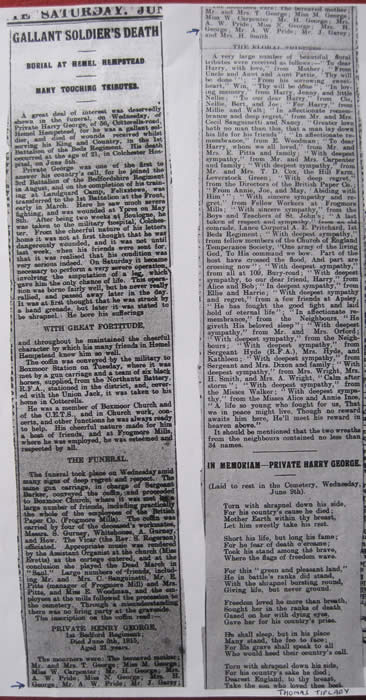 A great deal of interest was deservedly shown in the funeral, on Wednesday, of Private Harry George of 56, Cotterells-road, Hemel Hempstead, for he was a gallant soldier, and died of wounds received whilst serving his King and Country, in the 1st Battalion of the Beds Regiment. His death  occurred  at the age of 21, in Colchester Hospital, on June 5th.

Private George was one of the first to answer his country’s call, for he joined the 3rd Battalion of  the Bedfordshire Regiment in August, and on the completion of his training at Landguard Camp, Felixstowe, was transferred to the 1st Battalion at the Front, early in March. Here he saw much severe fighting, and was wounded at Ypres on May 8th. After being two weeks in Boulogne, he was taken to the military hospital, Colchester. From the cheerful nature of his letters home it was not at first thought that he was dangerously wounded, and it was not until last week, when his friends were sent for that it was realised that his condition was very serious indeed.  On Saturday it became necessary to perform a very serious operation involving the amputation of a leg, which gave him the only chance of life.  This operation was borne fairly well, but he never really rallied, and passed away later in the day. It was first thought that he was struck by a hand grenade, but later it was stated to be shrapnel. He bore his sufferings

and throughout he maintained the cheerful character by which his many friends in Hemel Hempstead knew him so well.

The coffin was conveyed by the military to Boxmoor Station on Tuesday, where it was met by a gun carriage and a team of six black horses, supplied from the Northants Battery R.F.A., stationed in the district, and, covered with the Union Jack, it was taken  to his home in Cotterells.

He was a member of Boxmoor Church and of the C.E.T.S., and in Church work, concerts, and other functions he was always ready to help. His cheerful nature made for him a host of friends, and at Frogmore Mills, where he was employed   he was esteemed and respected by all.

The funeral took place on Wednesday amid many signs of deep regret and respect. The same gun carriage, in charge of Sergeant Barker, conveyed the coffin, and proceeded to Boxmoor Church, where it was met by a large number of friends, including practically the whole of the employees of the British Paper Co (Frogmore Mills). The coffin was carried by four of the deceased’s workmates, Messrs. S. Gurney, Whitehouse, A. Gurney, and How.  The vicar (the Rev. S. Rogerson) officiated.  Appropriate music was rendered by the Assistant Organist at the church (Miss Evetts) as the cortege entered, and at the conclusion she played the Dead March in “Saul”  Large numbers of friends, including Mr and Mrs C Sanquinetti, Mr E Pitts (manager of Frogmore Mills) and Mrs Pitts, and Miss E. Woodman, and the employees at the mills followed the procession to the cemetery. Through a misunderstanding there was no firing party at the graveside.

The inscription on the coffin read:

A very large number of beautiful floral tributes were received as follows;

Uncle and Aunt and Aunt Pattie

Mr and Mrs Sanguinetti and Nancy

Directors of the British Paper Co

Annie, Joe and May

Boys and Teachers of St Johns

Two wreaths from neighbours contained no less than 34 names

The Gazette reporter had copied  from each of the Floral Tributes the sentiment written and the names.  These were all included in the obituary. The Obituary concluded with the poem by Thomas Tiplady.

Henry George is remembered on the War Memorial at St John’s Church, Boxmoor.   His cap badge, medals and memorial plaque had been kept in two, now rather scruffy envelopes. Last year (2013) the medals  were taken to the Boxmoor  Framing Gallery in St John’s Road where they have been mounted in a more fitting display.

Sadly no family  photographs of Harry (or Emma)  survive. But in Austin Pilkington’s boo, Frogmore and the First Fourdrinier: A History of the British Paper Company, amongst the photographs between pages 42-43 is a picture of  the company employees circa 1910.  Harry would have been 16, and  is surely amongst them.

Emma George never married or had any more children. She died, aged 68, on 11th October 1935 and is buried with her son in the grave at Heath Lane Cemetery.

Winifred Carpenter married a Mr Pecock in 1918. No other details are yet available save that, she died in Dacorum in 1992 at the age of 97.

Tom George & Pricilla lived out their lives at 56, Cotterells. They had three children: a boy, another Henry, and two girls Emily and Ellen. Ellen was born in 1890.  (Ellen was my grandma.)

Although the family had an original cutting  of the Gazette Obituary, the full date was cut off.  Last year (2013) I went to the reference library to view the microfiche of back copies of the Gazette to find the actual edition. A very friendly and helpful young lady librarian offered her help. She started with the micro fiche for Saturday 12th June 1915, the Saturday following the funeral, and  almost immediately we spotted the column heading ‘Gallant Soldiers Death’  She scrolled down the page, and scrolled again,  and on realizing that the text  continued for the whole column she said:  ‘My Word He Must Have Been Important'.